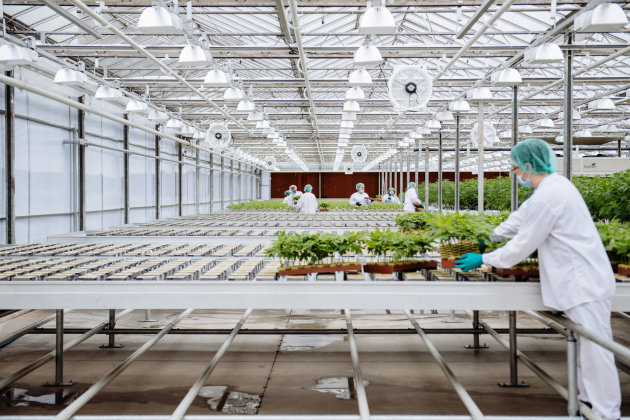 ‘A candidate market’ for jobs

It’s unclear how many jobs will be created and what the skills shortage will be now that marijuana is legal. But Ellis said though she’s received a lot of resumes for jobs at Cronos, it’s been difficult to find candidates with cannabis experience because it’s such a new industry.

But many skills in other fields are transferable, such as horticulture or working in a greenhouse.

Quality assurance for a food manufacturer would also give a job-seeker transferable skills, she said, because that type of work is also done under strict regulations set by Health Canada.

Ellis recommends putting a high-level summary on resumes or writing strong cover letters so employers can see what transferable skills candidates have.

A company in Toronto is hiring part-time workers to smoke marijuana, but most jobs don’t necessarily involve cannabis consumption.

Many of the administrative jobs are typical of any emerging or rapidly growing industry, such as marketing or sales. But of course, production jobs are aplenty.

Professionals in the cannabis industry say the main jobs in demand (as echoed by the Indeed report), are for workers to grow marijuana and for others to sell it.

Quality assurance workers for cannabis companies can be hard to find, as they need to not only be able to work with growers, but also follow proper procedure, fill out paperwork, and operate under a government framework.

Alison McMahon is the co-founder of Cannabis At Work, an organization with a website for jobs in the cannabis industry, and provides training to workplaces on how to deal with marijuana.

McMahon said the highest volume of jobs she sees is in quality assurance for licensed cannabis producers, who need to be able to work under a combination of government regulations.

The number two spot in the Indeed report, budtenders are retail workers at private dispensaries or Crown corporations, depending on the province.

As more licensed medical marijuana producers shift into the business of growing recreational pot— not to mention the new entrants to the business— the demand for growers, preferably with experience, is rising.

“In terms of demand, where there’s a shortage of talent, then we’re talking more on the cultivation side, especially more senior growers who do actually have experience within the regulated framework,” McMahon said.

Marketing and sales are a key role for companies in the cannabis industry. After legalization, they’ll need to be able to get their names and products out to larger retailers and bigger brands— a shift from working with smaller dispensaries or head shops.

Sasha Kadey is the chief marketing officer at Greenlane, a distributor that supplies products like bongs and vaporizers to smoke shops and dispensaries. He told HuffPost Canada that cannabis culture and the way consumers make purchasing decisions “doesn’t exactly resemble anything else out there.”

“Understanding how that 20 per cent of consumers that consume 80 per cent of the cannabis make their purchasing decisions and develop an affinity for a particular brand, can be pretty hard to understand if you’re not familiar with the culture, because it’s a little unique,” he said.

Kadey said there’s a lot of people out there who have a lot of marijuana product knowledge and many people with conventional business experience, but “not a huge, easily accessible population of people who have both.”

“The sort of sought-after skills— that are actually quite hard to find in the right combination— are people who have the traditional business acumen and experience, but can couple that with sort of intricate knowledge of cannabis culture and the way cannabis consumers make their purchasing decisions.”

McMahon told HuffPost Canada that finding someone with the right traits to work in the field can sometimes be more challenging than finding the right credentials. She said the perfect candidate is entrepreneurial and can work in an environment that’s constantly changing.

“It’s an incredibly fast-paced industry..even if you think you’ve been in some other industry that’s fast-paced, this sector is really, really, really demanding in terms of people’s time, but also just the pace at which they can work.”

Ellis said she’s also looking for people with a long-term commitment to a company.

“You want people to have the right attitude and come in because they want to see how the industry’s going to evolve, not just someone who necessarily comes in for a paycheque,” she said.

“Because it is such an exciting time, you want those people who are passionate about it, and who believe in it. It’s really important to the product as well.”

There’s a ton of opportunities to learn new things, and to kind of make your own little specialty area in terms of skill set within the industry. Alison McMahon, Cannabis At Work

McMahon said because cannabis is “one of the most prominent growth sectors over the next number of years,” working in the field is “an opportunity to get it still kind of early in the game.”

“It’s a really interesting way to take whatever your skill set is and transfer that into a new industry where it is very exciting,” she said.