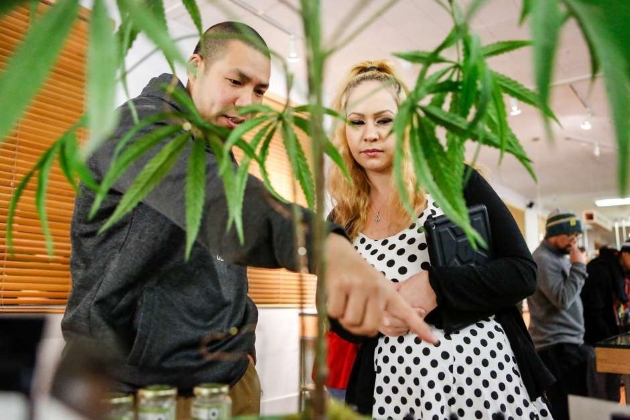 Canada often serves as America’s colder, nicer, saner foil, and its handling of marijuana policy exemplifies its more pragmatic side. While federal, state and even local governments in the United States hurtle in different directions on cannabis, our northern neighbor dispensed with much of the confusion by legalizing the drug at the national level last year.

Two Bay Area business deals this week presaged the literal dividends of that decision. Canadian cannabis concerns acquired the Oakland mega-dispensary Harborside as well as three San Francisco dispensaries owned by Apothecarium. The former transaction, valued at $153 million, is a reverse takeover in which a smaller Toronto company is acquiring its larger Oakland counterpart, which also has a San Jose dispensary and will retain most of the ownership of the resulting firm. Another Toronto company is buying Apothecarium for $118 million in cash and stock.

Both of the purchasers are publicly traded on the Canadian Securities Exchange, which listed about 50 American cannabis companies last year. That will give the firms valuable access to capital markets and dramatically increase their ability to grow in more than the cultivating sense.

That is in sharp contrast to the companies’ situation in the United States, where then-Attorney General Jeff Sessions was still mulling a war-on-drugs-style crackdown on marijuana even as Canada was moving to legalize it. Federal authorities were moving to shut down Harborside until 2016.

Cannabis remains illegal for medical or recreational purposes at the federal level and in 17 states. The nation’s law enforcement agencies are still making more than 600,000 arrests a year on marijuana charges, most of them for possession, a figure that has been rising in recent years despite increasing legalization. Such arrests disproportionately affect minorities.

The costs and harm of continuing criminalization are in addition to the economic benefits forgone in states that have changed course. Cannabis’ legal limbo cuts it off from regular banking and financial services, let alone the stock market.

Former California Treasurer John Chiang at one point advocated a fleet of armored cars to help the state collect marijuana taxes paid with huge quantities of cash. His successor, Fiona Ma, proposed special state-chartered banks to provide services to marijuana businesses; this week, she was among those urging the new Congress, in its first hearing on marijuana, to take steps to give the industry access to conventional financial services.

Both California and Canada have yet to sort out the many complications of ending marijuana prohibition, from ensuring that it doesn’t encourage more use among minors to making the legitimate industry more attractive than the black market.

The difference is in the minimally coherent national policy that remains sorely lacking in the United States.

In contrast to his former attorney general, President Trump has occasionally gestured toward a more forward-looking marijuana policy.

Given his fixation on trade with our northern neighbor, perhaps Canada’s emerging advantage in the industry will push the administration in the right direction.