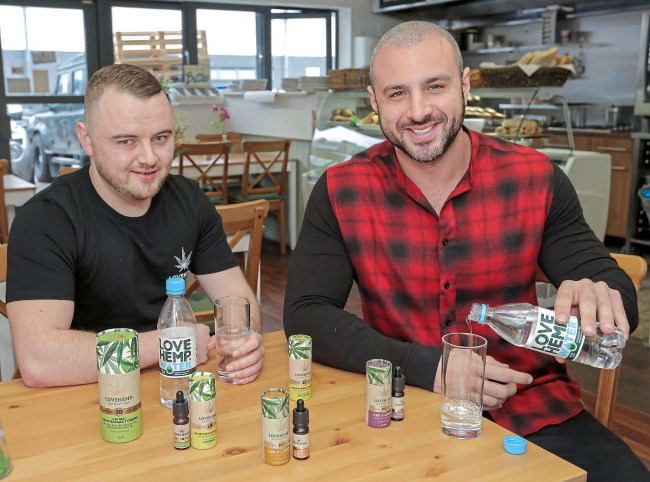 Few business ventures are refused a bank account, see their founders blocked from travelling to the US and are served a cease and desist notice. But then laddish entrepreneurs Thomas Rowland and Tony Calamita are not dealing with any old product, but cannabis.

Specifically, they’re selling products containing cannabidiol (CBD), the non-psychoactive part of the plant which in most forms is legal. Under their own brand, Love Hemp, CBD Oils has branded itself the “home of hemp”, selling everything from body salves to gummy bears infused with the distinctive taste online.

Last month the duo got the first cannabis-infused mineral water into a mainstream retailer, Ocado. At £1.29 a bottle, they’re attempting to take on Evian et al. Revenues are forecast to hit a healthy £6 million next year as the “green rush” for cannabis-based products worldwide takes hold.

“Cannabis is such an incredible product which is going to be making waves over the next five to 10 years and to be part of that movement is big for us. It changes people’s lives,” says the shaven-headed Calamita.

Who are their customers — maturing stoners? “Not at all,” Calamita bats away. “It’s health-conscious individuals.”

In fact, alongside Goop-types, sports people (particularly NFL footballers and Ultimate Fighting Championship stars) and body builders are embracing CBD products. “Those kinds of people have a lot of influence on social media and they are willing to try new products. They also notice the difference CBD makes on their body,” says Calamita. They’ve even started sponsoring some UFC fighters.

The venture is run from the corner of a bland trading estate in deepest Croydon. Tech City, it ain’t. But there’s plenty of bustle on entering the office, where schoolmates Rowland and Calamita share a corner desk.

The business was formed in tragic circumstances. When Rowland’s father was suffering from bladder cancer in 2014, he began researching cures and stumbled across CBD.

Their global plans and buy it, sell it past give a sense of their Del Boy-like confidence. Most bosses would bristle at the comparison with Derek Trotter, but Rowland smiles: “I’m a bit of a Del Boy, yeah I’ve done loads of things.”

On his CV is cab driving, running a family gym, selling beads and costume jewellery and an eBay electronics business, which was his first venture with Calamita. “We were selling tablets. They were breaking and being returned. It didn’t go too well,” says Rowland.

Calamita fared better. He sold his business as a broker selling peptides (used in drug and protein products) to university and research institutes, four years ago.

Rowland says their ascent in a controversial market has been “very smooth, for what it is”. But the red tape has proved a headache. They can’t extol the health benefits suggested in medical research on the packaging, and cannot have customer reviews on their site.

They even received a bombshell letter in October 2016 from the Medicines and Healthcare Products Regulatory Agency suggesting they would reclassify their products as a medicine. The pair threatened legal action through the trade association they had founded. “If they made it completely medicinal we wouldn’t be able to sell it. But they can never blanket ban it unless a substance is dangerous to public health,” says Rowland.

For now, their focus is on building up their water and vaping products, grabbing market share as the green rush takes hold.

Rowland Sr sadly lost his cancer battle: “He passed away on fireworks night, leaving with a bit of a bang. Out of something bad has come something good,” says his son.

Having seen the products’ popularity online, the pair spent £2500 of savings on stock, and £500 on SEO, selling out within a month on a 50% profit margin. They have simply reinvested their profits since.

The business began as a distributor for a Danish supplier before switching to their own brand, sourcing from the Czech Republic. “We contacted 30 suppliers. Back then the majority of the products were cowboys and even the testing facilities weren’t up to scratch because CBD was very difficult to test for,” says Calamita.

He was denied US access when trying to visit their current Colorado supplier, which extracts the CBD through a process similar to creating decaffeinated coffee. He hopes to return, as they lay the groundwork to launch in the US, this year.