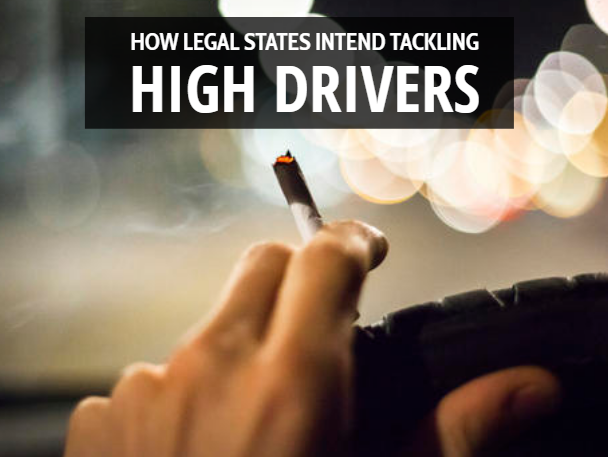 The issue of weed-intoxicated drivers is a serious and concerning one. Thousands of people die on the roads every year because people climb behind the wheel when impaired, whether “high” on pot, drunk on booze, or otherwise Non Compos Mentos. Until now, officers have not had any tools available to detect marijuana use in drivers, not accurately, not fairly, and not effectively. That is about to change.

Currently, officers can test those they suspect of driving under the influence of weed with those they use for drunk drivers. They only have field sobriety tests available to them, as well as breath, blood, and urine tests. Field sobriety tests are not effective for weed lovers, since weed does not affect people the same way alcohol does. They can still walk straight, stand on one leg, and pass these tests easily.

For this reason, field sobriety tests will not stand in court. Blood, urine, and breath tests are slightly more accurate, but not enough to provide concrete evidence of weed use. These tests can detect THC in the body, but they can only establish if drivers were “high” within the last week. They cannot determine if drivers are intoxicated now, as they are driving in that moment. This makes them legally irrelevant.

Now that cannabis is legal medicinally in more than 30 states and recreationally in 9 states, the need to develop an accurate test for weed impairment is crucial. In fact, some states that are considering legalization, such as New York, are demanding that companies develop a breathalyzer that will suffice as evidence in court. Much of their impending legalization hinges on this.

Back in 2017, some frightening statistics emerged out of Colorado. Its Department of Transportation conducted a survey that found a dangerously high number of “high” drivers risking the lives of everybody on its roads. At least 70 percent of surveyed participants admitted to driving stoned within the last year, and at least 27 percent confessed to driving pot-impaired daily. That is shockingly high.

Although the effects of marijuana and alcohol differ enormously, and despite cannabis being much safer to consume, there is no denying its ability to alter a user’s state of mind. No matter what anybody says, driving “high” is irresponsible and can get you and others killed. People should not be able to drive around intoxicated on pot, and enforcement officers must have some way to stop them.

A company from California, Hound Labs Incorporated, has managed to develop a first-of-its-kind breathalyzer device. It is fully capable of determining if drivers are “high” behind the wheel. It is likely to rollout across the country this fall, holding drivers accountable, making roads safer, and giving law enforcement the tools they need to achieve this.

The new pot breathalyzer is hypersensitive, able to detect THC on a driver’s breath. It also works for alcohol. On the company’s website, it says, “The Hound Breathalyzer is one billion times more sensitive than today’s alcohol breathalyzers.” This is excellent for everybody in the United States, except for those who insist on driving stoned and endangering their and others’ lives.

In the United States, anybody with a blood-alcohol level of 0.08 percent or higher is legally too intoxicated to drive. However, weed is more complex. For example, much scientific debate exists over what exactly qualifies someone as being under the influence of pot, particularly in the moment that he or she is behind the wheel.

According to Hound Labs, we now have the answer to that question. For its breathalyzers, timing marks that qualification. The company admits that its new technology is unable to determine just how much THC is in someone’s system, but it is able to detect its presence and how long ago that person consumed pot. THC remains on a person’s breath for up to two hours after consumption.

This time, called the “peak window of impairment,” is how officers will catch stoned drivers. After three hours, THC is no longer present on the breath and readings measure zero. Therefore, when a driver blows into a pot breathalyzer, it can detect the presence of THC, alcohol, even both, within minutes, but it also gives officers some compelling evidence to charge them with intoxicated driving

Because THC can only exist on someone’s breath during those two hours, the driver obviously consumed weed within that period if the breathalyzer tests positive. The driver must be guilty, since it will not detect THC after that time, and the effects of THC last much longer, sometimes several hours. If positive, the device will display “Warning.” If negative, it will display “Pass.”

Louisa Ashford, marketing manager for Hound Lab, said this in a statement, “The device will help ensure safety on our roads and in the workplace, while also promoting fairness to people who use marijuana legally and responsibly.” What this means is that these tests will not infringe on anybody’s right to use cannabis or subject them to any whims and fancies. It is a scientific, accurate method of detecting THC.

Pot breathalyzers, such as the alcohol and weed device offered by Hound Labs, as well as the roadside saliva-testing device developed by Cannabix Technologies Incorporated, a Canadian-based company, are able to remain objective. They can determine with accuracy the impairment of a driver, without basing evidence on a police officer’s hunches or judgements, or forcing them to endure intrusive tests.

John Levy writes for Pot Valet, a leader of marijuana delivery Los Angeles. He shares his research with the world at large and hopes fervently for legalization to spread across the planet.