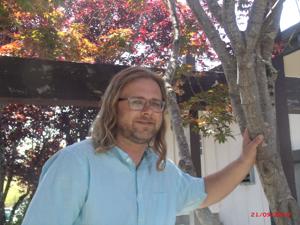 Lawyers, accountants and insurance agents were on hand to pitch their services at a meeting for one of the largest and now legal industries in the county growing and selling marijuana. On May 9 at the Freight Building at Depot Park, the county’s premier cannabis industry trade association, Green Trade of Santa Cruz, hosted a meeting for their members to network with the business support professionals needed to be successful.

Since county ordinances regulating the industry have finally been adopted, taking effect June 8, many growers and retailers, operating under temporary licenses’ in lieu of final regulations, need as much professional help as they can get to stay legal and thrive in the new industry.

“There’s a lot of challenges to the industry, but also a lot of resources available to meet those challenges,” said Pat Malo, executive director of Green Trade. “We didn’t have to pay any of those business service providers to show up at our meeting…they wanted to be there.”

With the legalization of marijuana, challenges face the industry.

“We’re in something of unchartered territory-  we need discover what we don’t know, and what hurdles need to be overcome- for this brand new industry,” said Naseem Nangoli, a principal in Accountabl, a tax, accounting, and business advisory services firm in Scotts Valley.

Transforming one of the largest, virtually unregulated “gray and black market” industries in the county, growing medical marijuana through cooperatives and retailing it through dispensaries, into a fully regulated, environmentally reviewed, licensed, and taxed commercial sector of the local economy has been no small task, and not without real disruption and loss of livelihood for many in the process.

Due in part because Santa Cruz County was relatively slow adopting its cultivation and retail ordinances, 18 out California’s 58 counties had already done so, including Monterey County.

Similar to Oregon, California allowed far more cultivation than could be handled by the limited number of retail outlets, formerly medical marijuana dispensaries, resulting in selling excess product at a loss for as low as $50 a pound in Oregon, according to Mayo. Massive overproduction of marijuana throughout California followed the adoption of Proposition 16 in November of last year, coupled with “a certain urgency” due to the uncertainty of how local jurisdictions would regulate the industry, according to Malo.

“Now former medical marijuana growers are facing a huge glut, and expensive, new costs for compliance… The wholesale price has crashed, and next year it’s going to get worse,” Malo said.

Malo explains he has navigated the perceived “green rush” of marijuana investors in several phone calls with self-described millionaires looking to invest, and while trying not to sound “altogether negative”, he has ended up advising against investment at this time.

“We’re never going to compete with Monterey or the Central Valley counties for mass production,” Malo said. “What we’re trying to create, through Green Trade, is an equivalent to the reputation of Santa Cruz county producing good, clean, organically grown, farm-to-table produce- in the marijuana market. That is, a relatively high-end, organic, worker friendly, ethical brand,” Malo said.

Malo laments the disruption legalization has brought to many small scale, more or less legal and “more democratically spread-out” small growers and cottage industries that made a modest living in the medical marijuana economy, but does not discount the environmental damage and criminal behavior that came along with it.

“I appreciate that the community is terrified of unregulated marijuana grows, almost as much as it is afraid of regulated cannabis cultivation,” Malo said at a public hearing in Felton back in February. “It’s hard for even hippies to feel sorry for environmentally abusive drug dealers,” Malo said.

Malo explains that maybe 25 percent of the “mountain growers” in the San Lorenzo Valley that supplied medical marijuana dispensaries and other “grey-to-black” market customers “saw the writing on the wall,” according to Malo, that they probably would be unable to get a license under the new regulations, and simply left for greener pastures, so to speak.

Malo, a life-time resident of Santa Cruz County, has first-hand experience in the 20-year history of the local medical marijuana industry, first legalized in 1996 via Proposition 215, to full-scale commercial legalization in 2016. Malo used to treat his father with cancer with medical marijuana back before 1996, Malo said, and has been with the industry, “in one form or another” ever since.

“We all miss the small business model of growing for the medical dispensaries, with growers focused on their patients,” Malo said. “I’m glad we’re taking steps away from the drug war and mass incarceration with legalization, but no one shed a tear for the loss of livelihood for many small growers who couldn’t afford going legal.”

Currently, now that the final regulations are in place, the Santa Cruz County Cannabis Licensing Office and Planning Department face a huge task of reviewing each site and the operational compliance of each applicant, estimated to be at least about 250 growers, now working under temporary permits, for their permanent license, which are renewed annually.