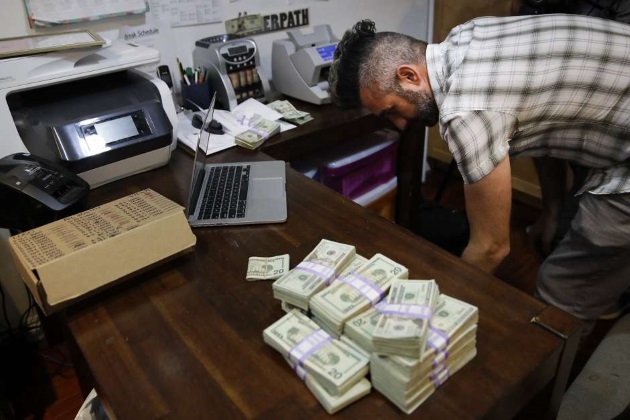 Bundles of $20 bills are placed on a table as Jerred Kiloh, owner of the Higher Path medical marijuana dispensary, prepares a trip to Los Angeles City Hall on June 27, 2017, to pay his monthly tax payment in cash in Los Angeles. A report released Thursday, Dec. 27, 2018, by state Treasurer John Chiang, concluded that California would likely lose money and face insurmountable federal hurdles if it tried to create a state-backed bank for the marijuana industry. The finding puts an end for now to hopes of creating a public bank as California’s recreational marijuana market concludes its first year.

The push to create a public banking system for cannabis commerce in California fizzled Thursday after a state task force concluded that such a facility would be so legally risky and expensive it would be essentially unworkable.

The 151-page feasibility report, commissioned by the 18-member Cannabis Banking Working Group, said it would take at least six years to create a cannabis bank and would require state laws to be changed, and that it ultimately couldn’t be done anyway without approval from the federal government, which considers marijuana an illegal drug.

State Treasurer John Chiang, the chairman of the working group, ordered the cost-benefit analysis in an effort to find a way to ease the burden for marijuana merchants, who have been forced to use cash because most banks won’t open accounts for them while the federal government maintains that marijuana is illegal.

While California and 33 other states have legalized the sale of marijuana, the federal government lists the herb as a Schedule 1 drug, defined as meaning it has no accepted medical use and a high potential for abuse.

The report, released during a public hearing at the State Capitol on Thursday, reinforces “the inconvenient reality that a definitive solution will remain elusive until the federal government takes action,” Chiang said. “They must either remove cannabis from its official list of banned narcotics or approve safe harbor legislation that protects banks serving cannabis businesses from prosecution.”

Instead of creating a bank, which the report said would pose “unacceptable” risks, the analysts recommended the state work with the cannabis industry to improve access to existing banking services.

The lack of banking for marijuana retailers complicates the state’s efforts to collect taxes from the industry. Every month, thousands of business owners head to the tax collector’s office with piles of cash in shopping bags and suitcases.

Industry leaders estimate that 70 percent of marijuana merchants in the state are using cash to pay employees, suppliers and California’s new 15 percent cannabis tax. As revenue increases, larger stacks of money will have to be lugged to the tax collector, making business owners vulnerable to theft, robbery and extortion.

“It is not only unfair, but a public safety risk to require a legal industry to haul duffel bags of cash to pay taxes, employees and utility bills,” Chiang said. “The reliance on cash has painted a target on the backs of cannabis operators.”

The feasibility study concluded that it would cost $35 million over six years to start a cannabis bank and then require an initial $1 billion in capital investment. The bank would then probably lose money for 12 years before it could begin repaying what was invested, and California would not be able to collect dividends for 25 to 30 years, according to the report.

Even if a bank could be created, the report said, there is a “high probability” that federal regulators would not approve it. If they did, the analysis said, chances are that marijuana would become legal federally before the bank could even get started, causing the entire investment to go to waste.

History hasn’t been good to public banks in the United States.

From 1917 to 2017, 29 public banks were chartered in the United States, and only the Bank of North Dakota and the recently created Territorial Bank of American Samoa have survived, analysts said. Neither of those banks caters to operations that the federal government considers illegal.

The analysts also looked at and rejected the idea of having the state purchase a private bank, create a public credit union or develop a cryptocurrency system for the cannabis industry.