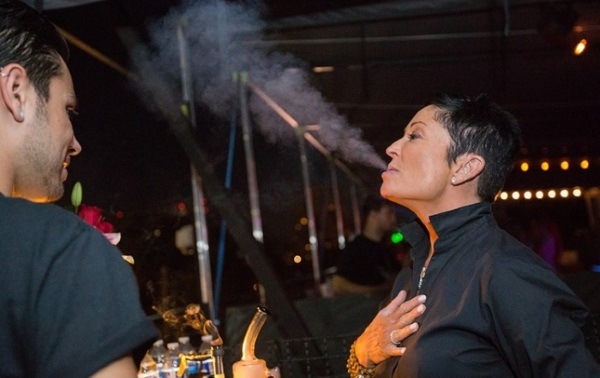 Coloradans approved legalizing recreational cannabis over five years ago, but we’re still trying to figure out this whole social-consumption thing. Denver’s Cannabis Consumption Establishment licensing program has only issued one license so far, and although a bill that would have allowed dispensary tasting rooms passed through the Colorado General Assembly, it was ultimately vetoed by Governor John Hickenlooper.

But that doesn’t mean you’re totally out of luck. A handful of bright and bold Denver-area businesses have figured out ways to allow social cannabis consumption without running afoul of the law. Most of them are private lounges and event spaces, but all of them are down with the cause. Here are twelve places where you can legally consume cannabis in and around Denver (if you’re at least 21), not including your own home.

The Coffee Joint might be in history books one day as Denver’s first licensed cannabis-consumption business. The coffee shop and lounge, which opened for social pot use in mid-March, allows electronic vaping of flower and concentrates as well as edibles consumption, as long as you bring your own cannabis (BYOC). Although you can’t smoke here, you can use your own vapes and dab rigs for the Coffee Joint’s e-nails, and the $5 entrance fee is waived if you’ve purchased products from the dispensary next door, 1136 Yuma. It might not be the full-out freedom you were hoping for, but it’s a start — and it’s legal.

The Coffee Joint might be the first licensed place where you can get high, but it wasn’t the first pot lounge in Denver. And neither was iBake Denver, but it was pretty damn close — and unlike other now-closed cannabis lounges, iBake Denver is still cooking. Because it’s a private lounge, iBake allows its members to smoke without worry of violating the Colorado Clean Indoor Air Act, and it regularly participates as a jumping-off point or chill space during big cannabis events in the surrounding area. You can become a member at iBake after signing up on arrival and paying a $10 monthly membership fee. BYOC.

Tetra 9 took many in Denver’s cannabis scene by surprise when it opened its doors without much notice in February. Like iBake, the pot club operates under the private-membership model, allowing you to sign up online for a daily membership for $10 ($25 after 9 p.m.), and weekend passes for $50. It’s quite a bit more expensive than other pot clubs, but Tetra 9 is right in the heart of RiNo (instead of on the fringes of Denver, like its counterparts), and it regularly hosts live music, food trucks and 420-friendly classes over the weekend. BYOC.

The International Church of Cannabis

Despite its name, the International Church of Cannabis allows cannabis consumption onsite only once per week during its Friday congregations. The evening ceremonies celebrate Elevationism, the practicing faith at the church, with members receiving invites every week after signing up online. On top of cannabis use (BYOC), the congregations feature educational talks, live entertainment and potluck dinners.

Spectra Art Space doesn’t advertise itself as a cannabis club, and it’s not. The South Broadway art gallery is better known for giving shine to local artists, chefs and musicians than hosting 420-friendly parties, but that doesn’t mean Spectra isn’t cool, man. The gallery regularly allows cannabis consumption in its private backyard during events, many of which showcase local glassblowers and are supplemented with gourmet munchies from eateries like Voodoo Doughnut. BYOC.

Cultivated Synergy is a private event space, not a private club, so you can’t just show up and hope to get in. However, Cultivated Synergy has fully embraced cannabis parties, throwing pot-infused events for the industry and its fans just about every weekend. When it’s not serving as a co-working space during the day, Cultivated Synergy hosts dab-filled shindigs for such organizations as The Grow-Off and Yeti Farms, as well as invite-only parties for the people, like its 4/20 Wook Show this year. BYOC.

Urban Sanctuary isn’t a lounge; like Cultivated Synergy; it’s a private event space that holds pot-infused shindigs from time to time. However, Urban Sanctuary’s events are more about healing the body and mind with the help of cannabis instead of throwing parties that focus on it. Certain (but not all) yoga and meditation classes at Urban Sanctuary allow pot use during the sessions, but make sure it’s cool before showing up with a joint tucked behind your ear.

Studio420 follows the private club model. That model has been tested over the years by various government agencies, and the lounge continues to outlast local persecution. This Englewood pot haven doubles as a glassware and tobacco shop, so membership is only $4.20 per day and $10 per month. The club also operates the 420 Tour Bus, a mobile cannabis lounge available for events and private use. BYOC

Summit Recreational Retreat presents itself as more of an upscale option for social cannabis consumption events and parties. The place accommodates around 35 people for parties, company retreats and any other tasteful event looking to add the flair of cannabis. The 1,400-square-foot home in Parker features a kitchenette, two consumption lounges with fireplaces, a Volcano Vaporizer bar, e-nails and dab rigs, smoking utensils, an indoor hot tub for seven people and a 55-inch flat-screen TV. Summit also offers overnight stays and cannabis massages for visitors, but it’s not cheap; contact the company for rates. BYOC.

The Loopr can regularly be spotted rolling around downtown Denver.

The Loopr provides a savvy solution to Colorado’s consumption laws, taking advantage of a law that allows pot consumption in limos and buses, just as alcohol is allowed. The “mobile cannabis lounge” is a massive bus that drives around pre-determined routes in Denver on the weekends, picking up members at designated pickup/dropoff spots who have signed up on the Loopr app. Although the Loopr isn’t easy on the wallet ($29 for a three-hour pass, $42 for a full day and $80 for three days), it offers affordable weekly bud crawls, taking riders on a journey through several Denver dispensaries for just $35. BYOC.

Although My 420 Tours does have a physical location to meet at (3881 Steele Street), all of the consumption is done elsewhere. Like the Loopr, My 420 Tours has buses that take guests around town while they toke up — but instead of following a route throughout the night, My 420 Tours will take you to growing facilities, edibles- and hash-making classes, restaurants, dispensaries, head shops, cannabis consumption lounges and plenty of other places, depending on what package you sign up for. BYOC.

Club 64 keeps its location and information close to the chest, only sharing its Denver address once you sign up. The private cannabis club requires that membership be paid over the phone for $20 on the Square app, or you’ll have to pay double at the door. To add perks, Club 64 shares with members a list of secret 420-friendly bars and clubs, and it brings in a local cannabis celebrity or entertainer once a month to blaze up and chat with members. BYOC.